CELEBRATING OVER 50 YEARS IN THE HOSPITALITY INDUSTRY ON MONTEAGLE MOUNTAIN!

Since 1960, 20 million customers from all over the world have come & gone through Jim Oliver’s doors and sampled his delicious Southern Cookin’ inspired by generations of family cooks. Jim Oliver passed away in May 2007, and his adult children, James David and Betsy Oliver (pictured left), are now running the family business. Jim is also survived by daughter, Nancy Oliver.

How It All Got Started

In 1960, twenty-one year old Jim Oliver started building his reputation for cookin’ and excitement at an old “Honkey-Tonk” he rented called the Bee Hive Drive-In…with 2 employees, 6 counter stools, a juke box, a pin ball machine, and curb service to the parking lot which served as the dining room and fist fight brawling area; there wasn’t a lot to do around town, so fightin’ was pretty popular entertainment for all the mountain and valley locals.  When Jim first opened the little drive-in, the local State Trooper, Bill Malone, told him to either, “run it right, or I’ll run you off”.  So, Jim took to cleaning up the brawlin’ and fightin’ himself …and that he did.  For the rest of his life, Jim Oliver was known as a man who didn’t put up with… well, you know what I’m talking about! Jim Oliver was a practical jokester and he loved to get the last laugh in on all his friends; of course, all of his friends liked to play jokes on Jim, too.  One time at the Bee Hive, one of Jim’s friends, Hamper McBee, (who was also a part time grill cook and Moonshiner) and Jim set up a “shoot out”.  Jim kept a 38 revolver under the counter and he loaded it with blank shots. Hamper put some tomato ketchup in his hand and sat at the bar drinking a beer.  Jim was behind the bar.  When the unsuspecting mutual friend of theirs walked in, Hamper and Jim started an argument and got quite loud, swingin’ arms and sworpin’ around.

The friend who just walked in backed up, trying to stay out of the way of all that swingin’ a goin’ on, then Jim said, “I’ve had enough of this #*@ %^?! Hamper!” Jim reached under the counter, pulled out the old trusty 38 and ‘Popped a Cap’ on poor ole Hamper, who promptly grabbed his chest with the hand full of ketchup, splattering it all over his shirt and face.

Well, when Jim looked over to see what the other man was doing, he saw him a runnin’ out the door toward the south end of town yellin’, “Jim Oliver’s a gone crazy and killed Hamper McBee. I saw him shoot him in cold blood…I was there and saw it all!” The man was so scared he ran to several businesses and houses down Hwy 41, which was also Main Street, telling everyone what had just happened.  Well, he finally found ole Bill Malone, the only State Trooper in two counties, and got him to go to the Bee Hive to investigate the killin’. When the two pulled up in the patrol car and went in, Hamper was sittin’ at the bar drinking another Pabst Blue Ribbon talking to Jim who was cookin’ something on the grill.  The guy looked at Bill and said, “he’s dead, I knowed it, I saw it!” Bill looked at Jim and Hamper, then looked at the scared man and said, “Well, you’re not the first one they’ve done this to, so don’t feel like the Lone Ranger!”

The Monteagle Diner is Revived

The Bee Hive thrived and Jim made enough money there to buy another historic landmark restaurant just down the street.  Jim and his brother, Melvin, purchased the historic but fledging Monteagle Diner and reclaimed its fame by re-making it one of the most well known restaurants between Chicago and Miami along the famous “Dixie Highway”.  “Tennessee Country Ham & Hot Biscuits” was the catch phrase on the billboards out on the highway and travelers up and down the byway came in to sample the great cookin’ at the diner. Here is a short story about an incident that happened at the diner one cold and lonely night in 1967.  Jim and Melvin were getting ready to close up…counting cash register money and taking out the trash when three men walked in and sat down at the counter and ordered beer. After bringing the men their beer, one of them said, “give us the money out of your register”. Melvin, who was at the register, looked at Jim, gave him the ‘look’, and then walked calmly over to the front door and turned the key to lock up, pulled the key out, put it in his pocket and asked Jim, “Which one do you want?  I’ll take these two.”   The three ‘would be robbers’ got the, …well, ‘you know what’ kicked out of them pretty quickly by the two Oliver brothers. That’s the way they did it, they just took care of business, and another story was added to their “takin’ care of business” reputations.  Besides a fightin’ and pulling practical jokes on their friends, they did like to cook, too.

The Smoke House Is Born Twelve years later, in 1975, building it from the ground up, Jim opened up the Smoke House Restaurant with 14 employees, 80 seats in the restaurant, a little gift shop, and a menu full of family recipes handed down from generations of Oliver cooks, featuring traditional old smoke house style meats. Today it is still operated by Jim’s children, serving the same family recipes, and a few of them with Betsy’s (Jim’s daughter) twist of her own. The restaurant has over 70 employees, 500 seats, a 10,000sf General Store full of antiques and old fashioned goods, a Best Western 85 room Lodge, 20 Rustic Log Cabins featuring fireplaces and Jacuzzi tubs, a 5000sf Conference Center accommodating meetings/reunions/and music shows on Saturday nights, and over 20 acres of recreational campus. “Dad was never satisfied with standing still, he built and built and built until he created a business that could cater not only to local folks, but also to all the travelers up and down the highways”, states James David Oliver, Jim’s son.

Music On The Mountain at The Patio Grill

In conjunction with the 50th Anniversary, Jim Oliver’s Smoke House is featuring: “Music on the Mountain, featuring The Best of Nashville”, a singer/songwriter acoustic music show, every Friday and Saturday night. FREE to all Smoke House patrons as a “Thank You” to all our loyal customers. NOTE: Unfortunately, due to a fire in the restaurant on April 27, 2021 our Historic Restaurant & Trading Post was totally destroyed. But, we have been able to reopen our food service in another building around back of the original restaurant site, and next to the Lodge & Cabins, we now call this venue our Smoke House Patio Grill. Every Weekend you can come and enjoy Hot Food, Cold Beer, and “Cool” Live Music at our outdoor facility, THE SMOKE HOUSE PATIO GRILL! The future of the Smoke House holds much promise. These next generation Oliver’s are embracing the technologies such as developing social network sites, and building an E-Commerce Online Store for marketing the over five hundred Smoke House Brands. It’s the Oliver’s goals to keep the old traditions alive and in place, while remembering where they came from and how, and use the new methods of business (just like Jim used the new Interstate in 1960) to grow with the times into new markets and customers on the current information highway. Come Visit Us Today!

You can check out what the Oliver’s have going on by visiting our Events page…Or, just drop by and see what’s cookin’! 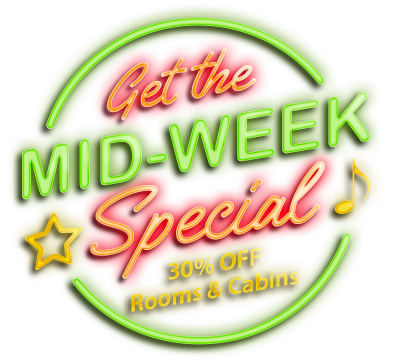 Get 'MID-WEEK DISCOUNTS' from The Smoke House on Cabin Rentals, Free Activities, and More!